NKO - "The Architecture of Endlessness" 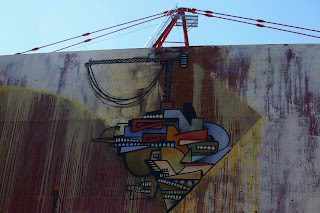 The Architecture of Endlessness, a new mural by NKO, will officially open for the second Thursday ArtBlitz from 5pm until dusk on September 13, 2012, between Denny and John on 10th Avenue East in Seattle. Situated on the East facade of Sound Transit’s Link light rail Capitol HIll Station construction site - also known as the Red Wall - this 24’x 240’ painting will remain until the station construction is finished.
For more info on NKO - here and here. An earlier post about the project as it commenced is here. 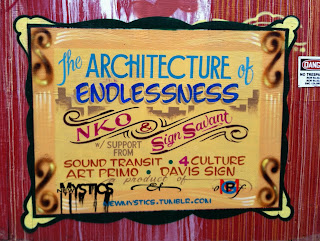 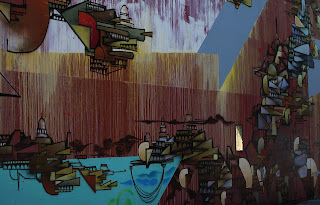 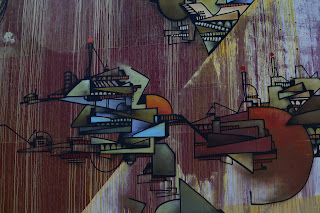 The Architecture of Endlessness was designed and painted by NKO, with assistance from Sign Savant’s Japhy Witte. Executed over five weeks, the mural is an abstract, improvisational reaction to the site framed by concept (and word) of endlessness -- both in relation to the site itself (the painting will disappear in a few years) and to the continual evolution of the city. Repeated letterforms collapse into colorful cityscapes, towers climb within impossible geometries, lifter cranes swing freely above as the clouds roll in... the visual tableau is of a jumbled, brightly lit future accented by surreal moments of colorful nostalgia. 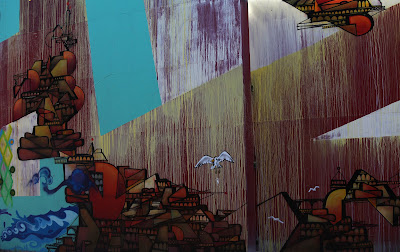 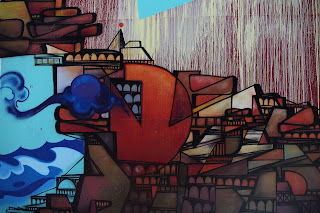 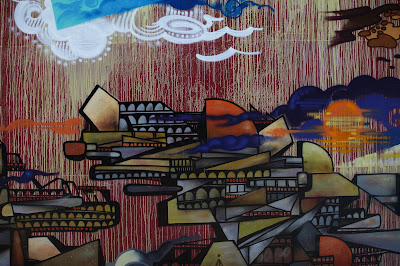 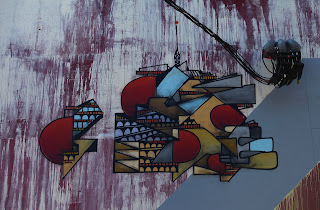 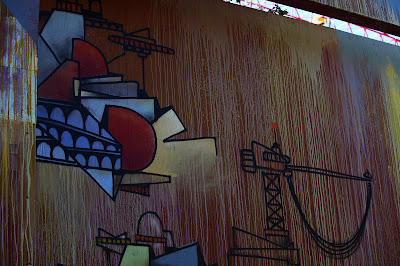 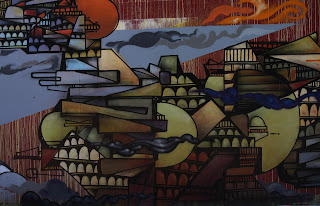 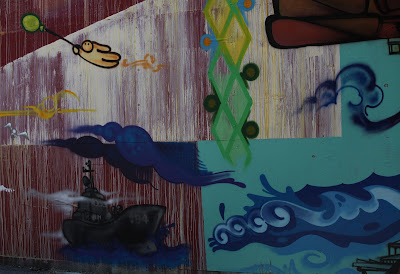 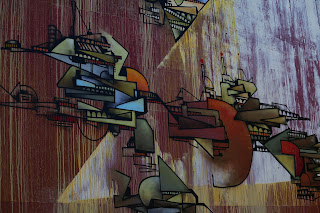 The project is curated by New Mystics and commissioned by Sound Transit through STart, it was also funded by an Individual Artist Project Grant from 4Culture, and received support from Sign Savant, Art Primo, Davis Sign and Painter’s Guild of Magic. D.K. Pan is the STart lead artist who helps shape the Red Wall art commissions.

NKO is a Seattle based visual and performance artist, curator, and designer. He is founder, with DK Pan, of Free Sheep Foundation and Black Sheep Book Arts. No Touching Ground and NKO are also founders of New Mystics. NKO regularly works with experimental theatre company Saint Genet, and has been a long time volunteer at VERA project silkscreen studio. As a curator, NKO has produced shows for Bumbershoot, City Arts Festival, and has worked with the Department of Neighborhoods, 4Culture, Office of Arts and Cultural Affairs, and Seattle Parks Department.

Japhy Witte, aka Sign Savant, is one of the finest sign and scenic painters in the city of Seattle. You may have noticed his other work on the Red Wall project - he has composed and executed all of the hand painted artist title cards adorning the wall. You can also find his work at Under the Needle tattoo in Belltown, and on almost every block of West Seattle. Japhy has worked with MOHAI on restoration projects, and also regularly works with New Mystics and Saint Genet.

STart, Sound Transit Art Program, presents an exhibition of temporary public art at the future site of the Capitol Hill Station in .

The Capitol Hill Wall Project is a series of installations by regional, established and emerging artists exploring the ever-changing landscape of the neighborhood and the city.

Sound Transit is currently building a light rail station in the heart of Capitol Hill which will connect the neighborhood to service to the and SeaTac Airport. Over the next four years, through 2014, a two-block stretch between Broadway and will be surrounded by a construction wall as the area is excavated and the station is built. During this construction period, STart will turn the construction wall into a public art lab with a rotation of commissioned works from a wide range of artists.